Now that’s a lot of bull right there… 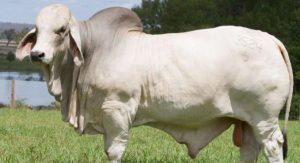 A Grey Brahman Bull bred by Brett Nobbs at his property Inverrio, 100 kilometers west of Rockhampton, Queensland Australia was sold at auction on the property for an Australian all breed record of $325,000.

There were many farmers and breeders that attended the sale with a high quality selection of stub Brahman animals on display but when Lot 37 came into the ring there were 2 remaining stud farmer breeders locked in a bidding battle for the highly prized 2 year old bull, NCC Justified.

The bull was eventually purchased by Roger and Lorena Jefferies from the Elrose Brahman Stud Farm with the under bidder being Helen and Les Donaldson and family from El-Ja Brahmans Stud Farm. Two well known Brahman Stud Farms that are not afraid to put their money on the line when they see real quality.

You can see more on the story at Beef Central

Watch the video of NCC Justified, beautifully breed and quiet nature temperament of an outstanding specimen at his farm.

So you might be thinking, wow that’s a lot of money to spend on a bull and he will need to do a fair bit of breeding to give a decent investment return. Be assured this guy and many other breeding stocks get well looked after and there is a plan in place.

Stud farm breeders do their homework and put time into searching for their seed breeding stock with high emphasis on animal genetics. They look for size, length, muscle tone, breed and beef quality and also temperament. With these attributes and others, they farm the semen and then sell the specimens at a valued price. Over the bulls’ lifetime the monetary returns for the progeny produced get into the high $100,000 and definitely make it a worthwhile investment exercise.

Cattle stud farmers have many high prize stud bulls and cows with genetic attributes that are sourced by many farmers wanting to improve their cattle’s yielding. They can do this by either purchasing the bulls or breeding cows or by purchasing semen that will be artificially inseminated into their own cow herds.

Stud breeding of cattle is how the beef and dairy industry improves meat yield and milk yield. Years of selecting and breeding animals to capture the best attributes is what stud farmers focus on to improve quick weight gain and animal growth, when it comes to the meat industry and high milk quantity and quality when it comes to the dairy industry. It has become quite scientific but you can’t beat an experienced farmer that can look at an animal and pick out what they perceive as an animal having the goods required to become a top breeder and bring value to the herd.

Over the years prices for stud breeding stocks have improved and this has brought about confidence in the meat and dairy industries with farmers willing to continue to bid up prices and constantly looking for an advantage to get ahead of the competition. It’s not only the Brahman cattle breed that is in demand but other breeds have been fetching high prices at each sale and auctions around Australia as well. Here are other examples take from The Beef Central Website. 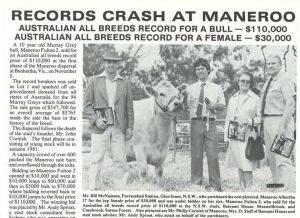 See Beef Central with more listings and more information details on each animal listed above.

Dairy stud breeds also get into the picture when it comes to genetic improvement. See HERE for a story of a Holstein heifer calf that sold for $251,000 from an Australian breeder to a Texas firm in January 2017. Only a baby but with so much potential for the dairy industry, that these guys were prepared to set a new record price.

Well, I guess you can see that the cattle industry certainly takes its business seriously. Investment is continually added to improve quality not only for meat production but also dairy production. As our population increases the demand for protein and dairy just continues to grow. Farmers rely not only on experience but also on scientific research and studies to try to get a head of the herd (pardon the pun) to produce high quality food for people wanting a unique and enjoyable healthy eating experience. 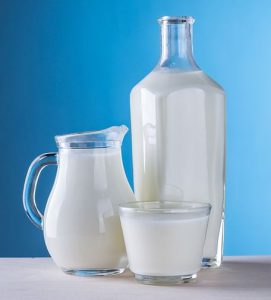 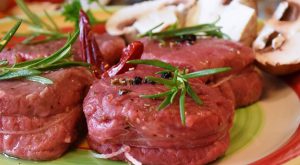 I think after reading this article you might look at a steak in a different view, and have an appreciation of what our farmers do to get the right meat and dairy products for you. It’s incredible to think at what we pay at the store for our produce, has taken care, research and hard work to keep our basic foods affordable. Stock breeding and farming have come along way and will continue to improve into the future.